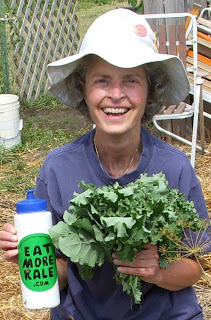 I've been off the web for a month, so I have lots of ideas for catch-up. Let's get started!

Kale is definitely more than decoration on the plate in our house. In fact it often takes center stage. Here are two fabulous recipes, mine a variation of my husband's creation, plus more suggested variations than even we could make in a month! I've included my husband's narrative about his creation of a recipe for Kale Slaw first, followed by my recipe for a Kale-Bean Salad that was a big hit at a recent Ann Arbor Lady Food Bloggers Picnic.

While working in the garden in late July 2008, I broke off a piece of a kale leaf and was munching on it as I watered tomatoes and harvested onions. Pretty tasty, I thought and then the idea came to me. Maybe raw kale would make a great slaw. After all, most American slaws are made with cabbage, which is a member of the same brassica family of plants, so why not give it a try. An internet search confirmed that no great idea is unique and, in fact, the term “kale slaw” turned up lots of links but few recipes. So, here is what I came up with, and it turned out to be pretty tasty. The basic recipe is adapted from another for Texas Cole Slaw in our 1971 edition of The New York Times Natural Foods Cookbook by Jean Hewitt.

Prep is easy. Harvest fresh kale leaves the day you prepare the slaw. Wash the leaves and shake them dry. You may trim the stems but I leave them in. With a sharp knife dice the leaves until you have pieces the size you would enjoy in your slaw. Combine and mix the kale, pepper, carrot, onion and pressed garlic in a ceramic bowl. You may want to reserve a small piece of carrot to put through the garlic press after the garlic to get as much of the garlic as possible through the press. In a small food processor (preferred) or bowl, mix the remaining ingredients thoroughly to dissolve the brown sugar and emulsify the oil with the remaining liquids. Pour this dressing over the mixed veggies and let the mix marinate in the refrigerator for at least a few hours. Very crunchy and tasty!

Options I want to try: The recipe above is exactly what I prepared on my first try and it was good. Alternatives might include adding a teaspoon of fennel or dill seeds, some dry mustard, or a diced jalapeno pepper. It might be nice to include cucumber, celery or other crunchy vegetables or an apple. Perhaps curry powder and raisins.

Sorry to admit this yummy salad got eaten completely before a photo was taken. I'll be sure to insert one the next time Dick makes this! 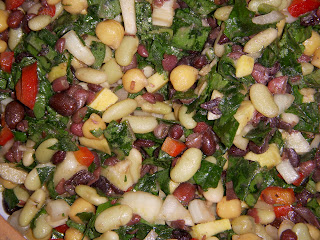 For days after tasting Dick's kale slaw, I kept thinking it reminded me of something else I had eaten, in fact eaten a lot of. Hmmmm, it finally came to me (aha!) that the dressing was very similar to my mother's recipe for a 3 bean salad. Thus, my recipe is a variation of Dick's kale slaw with several types of beans added to more mimic my mother's bean salad recipe and a couple of other changes, which turned out to be a very pleasant taste surprise.

I washed the kale, trimmed away the big or tough stems, shook the leaves dry, then spun them in the salad spinner to dry even more (surprisingly little water was left after shaking dry initially). I diced the leaves into small pieces with a chef's knife. It sounds like a lot of work, but the dicing went quite quickly. In fact, I had picked more than enough kale from our garden.

Dice the onion, fennel, and red pepper.
Toss all together with the kale and beans in a very large bowl.
Add the dressing and toss again. This dressing recipe made the bare minimum of dressing for this amount of salad. I think next time I might experiment with making 1-1/2 times the dressing amount.
Allow to marinate to blend flavors, then transfer to a serving bowl where all the beautiful colors of this salad can be seen and appreciated.

I was worried both that the fennel would be too strong or that it would not be discernable. However, I was as pleased as could be at the subtle flavor that the amount of fresh fennel and seeds I used contributed to the overall salad. One friend attending the picnic said she didn't think she liked fennel but maybe she did! I don't recall that my mother ever used fresh fennel or fennel seeds in anything she cooked. I think adding the fennel and kale makes a refreshing update to her bean salad (which was my only introduction to dried beans while growing up). 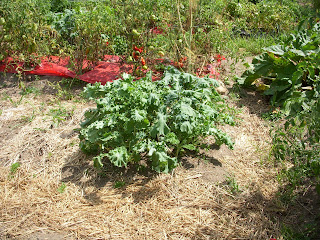 This is a photo of the row of kale (about 3 feet) we planted in the spring, still going strong in September. We also have one plant that wintered over, which is still growing leaves to pick and is also producing seeds that we are collecting to plant next year. In addition, we have MUCH more kale planted (gosh, maybe 20-25 feet??) for the fall that will be producing in abundance throughout the next many months with plenty for freezing, too.

Guess what my husband and I will be doing this fall? Like my T-shirt and water bottle say, "Eat More Kale!" :-) Enjoy the taste and feel fulfilled. (Believe it or not, even our dog eats kale!)

I'm going to end with an abbreviated version of a prayer that captures a spirit of gratitude and enjoyment for the nourishment to body and spirit that good food and a good life provide.

Taste and see that God is good.
Why spend your substance on what does not nourish
And your labor on what cannot satisfy?
Listen to me, and you will enjoy what is good,
And find delight in what is truly precious.
~~ Abraham Isaac Kook (1865-1935)

That salad was awesome! I really like kale...try the kale crisps that Victoria brought to the July party...they are really good!

Both recipes look really good. I will be trying them soon. I wish I had planted a little more kale--my chickens love it as well and get a big bunch of it along with other greens every morning. Next year I will plant more so I have enough for all of us!

Patti,
I don't know if I'll ever eat potato chips again. Victoria's kale chip recipe has changed my life! That's a bit of an exaggeration, but not much. :-) I now make kale chips at least once each week. I am experimenting with various seasonings, different vinegars, and also just plain chips. Another way to "eat more kale".
Diana

Kateri,
I think you could still plant some kale if you have a sunny spot that is close to the house. Although we almost had a frost last night, we (hopefully) still have many weeks left before hard winter sets in.

We did miss meeting you at our Ann Arbor Lady Food Blogger's picnic this past Saturday. Hopefully, we'll meet you at a future gathering. The food is scrumptious and the conversation is non-stop!
Diana

Diana, I'm going to try both of these. We have a lot of kale and I happen to have all those Tantre beans to use right now. I may make it single bean salad, but it will be lovely, I'm sure. Thank you!

That is a fantastic photo of you. ;)

a friend gave me a big huge bag of kale today and I thought about you. I don't think that I will ever eat kale again without thinking about you.

It does look wonderful for kids of all ages. Thanks for sharing with kale-bean salad recipe. I know my husband will love eating this...as long as he can use his fingers.