My endowment funds research on CLA in 2009

Since 1999, proceeds from the sale of my book, A Dietitian's Cancer Story, have been donated to The American Institute for Cancer Research (AICR) in Washington, DC, where I established the Diana Dyer Cancer Survivors' Nutrition and Cancer Research Endowment. I know that is a very long name, but I chose it to help promote awareness of the need for research that focuses on nutritional strategies, either during or after treatments, to optimize the odds for long-term survival from cancer (as opposed to primary prevention of cancer) or the quality of life after a cancer diagnosis, both equally important and complementary goals.

My selection this year is an unusual project, but one of urgent importance. I understand the need to financially support basic (i.e., early) scientific research to further understand the complex molecular mechanisms responsible for the nutrition and cancer connection, however, my preference is to support research that is closer to being translated into actions for patients (and the clinicians guiding them).

The title of the project I have selected for 2009 is "Chemoprevention of her2/neu over-expressing breast cancers" by Dr. Margot M. Ip, at Roswell Park Cancer Institute in Buffalo, NY. Among the many interesting and worthy projects that AICR is funding in 2009 (all through individual financial donations), this project rose to the top for me. If Dr. Ip's new research will help confirm the unexpected observations in some of her previous work, the results will have immediate and important implications for women at risk for breast cancer (gosh, I think that might be all women!) plus those already diagnosed with the her2/neu genetic variation.

Here is the thumbnail sketch of the background and the gist of the project my endowment is funding this year. Previous research has shown that conjugated linoleic acid (CLA) has anti-cancer activity. CLA is found in our foods, not in plants as the myriad of other health-promoting molecules collectively called phytochemicals, but in the fats of ruminant animals (cows, sheep, bison, goats, llamas) and in their products such as meats, milk, cheeses, and other dairy products. Highest amounts of CLA are found in the fat from animals that have been 100% grass-fed versus those who have been exclusively or partially grain-fed.

However, CLA is not just one molecule, but instead, it is a collection of similar molecules with slightly different configurations called isomers. Aha! The devil is likely to be in those details of the 'slightly different configurations', especially when comparing the actions of each isomer in the body. The vast majority (~80% ) of CLA found in our food is the isomer called cis-9, trans-11 (or c9,t11-CLA) with a far less percentage being the isomer called trans-10, cis-12 (or t10,c12-CLA). The mixture of synthesized CLA isomers present in the dietary supplement capsules available to purchase contains less of the c9,t11-CLA isomer and much more of the t10,c12-CLA isomer than a typical food source.

While most research to date has shown that both forms of CLA have anti-cancer activity, some unexpected recent results from Dr. Ip's lab showed that the form of CLA present in increased amounts in dietary supplements (the t10,c12-CLA) actually increased the number, size, and metastases (along with shortening life expectancy) in mice given breast cancer with the genetic variation that over-expresses Her2/ErbB2.

Here is the title and abstract of her initial research:
t10,c12-Conjugated linoleic acid stimulates mammary tumor progression in Her2/ErbB2 mice through activation of both proliferative and survival pathways.
Carcinogenesis. 2008 May;29(5):1013-21.

Primum non nocere is a Latin phrase that means "First, do no harm."

Hmmm, my brain is cranking here. Yes, Dr. Ip's finding is considered early research, with completely unexpected results, and is just one study in the compendium of observations that compose the larger picture of understanding the mechanisms of action of CLA. However, since ~1/3 of all women who do get breast cancer have this aggressive Her2/neu genetic variation (and don't know they have this genetic variation until their breast cancer tissue is evaluated), I think it would be prudent to be cautious about using a CLA dietary supplement that contains the increased amount of synthesized t10,c12 isomer of CLA that might increase risk of developing the cancer and also increase risk of spread and death. To heighten my caution about a person who has not been diagnosed with cancer using a purchased form of CLA (versus obtaining CLA from grass-fed food sources), the same Her2/neu genetic variation seen with aggressive breast cancers can be found in other cancer types, too!

The actions of nutrients and other 'bio-active food components' (such as CLA) in our body are complex, with much much much still to be understood. It is possible that Dr. Ip's recent observation of the ability of the t10,c12 form of CLA to promote cancer in mice with this particular genetic variation will not be able to be replicated in her subsequent research, meaning that those first results could have been simply due to chance (yes, that can happen, which is why science advances only with repetition of results). Of course, it is also possible that any observable action in mice cannot be repeated in humans (yes, that happens, too).

However, in the meantime, I think it is reasonable to think twice before consuming purchased CLA dietary supplements, which are frequently advertised to "burn body fat and enhance muscle growth". To compound my own caution, some published papers have reported results observed in humans consuming the synthesized forms of CLA that would not be favorable for reducing overall cancer risk, such as increased insulin resistance and an increased plasma marker for inflammation.

I've already said this, but it is worth repeating. Nutrition is still considered a very young science, particularly as we try to understand how whole diet patterns, whole foods, and various individual components of foods can promote optimal health, not just prevent deficiency diseases. In particular, much is still to be determined about both safe and effective uses of both dietary supplements and the fortification of foods with various molecules (including CLA isomers). 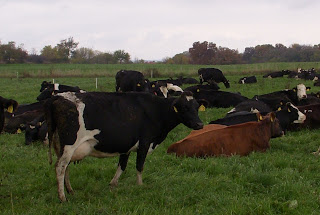 My recommendation is to obtain CLA from food, i.e., particularly grass-fed animal sources, instead of synthesized dietary supplement capsules or foods that may be fortified in the future by adding synthetic CLA isomers. One hint: low-fat and full fat products will have more CLA than fat-free products. (Photo: grass-fed dairy cows on an organic dairy farm in south-eastern Wisconsin that is a member of the Organic Valley co-op)

Thank you to all who have purchased my book in the past. It has been in print continuously since 1997, reprinted over and over again, with additions or tweaks in each new printing.

As a refresher, my book (either the English or Spanish edition) is available to order from any bookstore, AICR by calling 1-800-843-8114, Amazon.com, and from my favorite local bookstore, Nicola's Books in Ann Arbor, MI ordering from either her web site or by calling 1-734-662-o600, where you may purchase a personally autographed copy to be mailed to you or someone else as a gift.

Step, step, step, inch by inch, row by row. You have been a part of my mission by helping to cultivate (i.e., improve) true comprehensive cancer care. I thank you again, as will all people diagnosed with cancer in the future. :-)

my neighbor asked me this morning if I would like to go in on a cow share with them and I DEFINATELY doing it;) Thanks for all you do;)