Turkeys on the farm! 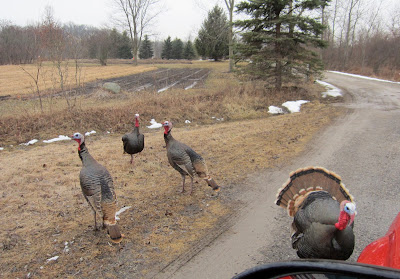 The first appearance of turkeys on our farm and darn, I wasn't there to see them! My husband showed up late this afternoon to finish some caulking and was just stunned to see a flock of 9 turkeys walking through the garlic field. As he stopped the car to gawk (and shoot some photos), the clear leader of the pack (flock) ran over to the car, all fluffed up to show he was the commander-in-chief, and actually attacked the headlight on my husband's car. After watching for many minutes, Dick drove the car up the driveway to the house, with the turkeys all chasing the car up the driveway. More watching and taking photographs from the car, and calling me, before he made a dash into the house. Even an hour later, all nine were still hanging out in the driveway and he had to distract them with birdseed, which he tossed across the driveway, before he made a dash into his car. Yes, there they were, all nine of them chasing him down the driveway as he drove home.

I've been sick and home for the past 3 weeks with the "virus from xxxxx", but I'll make it out to the farm tomorrow. I can't wait to see them for myself!

Email ThisBlogThis!Share to TwitterShare to FacebookShare to Pinterest
Labels: Birds, The Farm

Really cool. I haven't seen any signs of the turkey family that roosted in our pines all last summer. Hopefully they are still around somewhere.