No matter the weather tomorrow, no matter what jokes may be in store for April Fool's Day (actually for an early joke my fingers automatically typed April Food's Day!), no matter if we still get a late snow, we will really appreciate April's spring and renewal this year!

Here are a few photos, just a few from this afternoon. 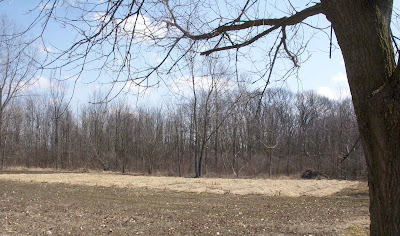 Photo: The 2013 garlic field at The Dyer Family Organic Farm, where yesterday I walked through the field to straighten (or find and replace) the stakes marking the end of each section for our 40+ varieties. Deer walk through the fields all winter at night without out any regard for carefully walking on the paths between our raised beds (Walking 101), or an even more advanced concept, walking in the designated sections between the varieties (Walking 201). Not too many deer signed up for either class! As a matter of candor here, neither did Phoebe. :) 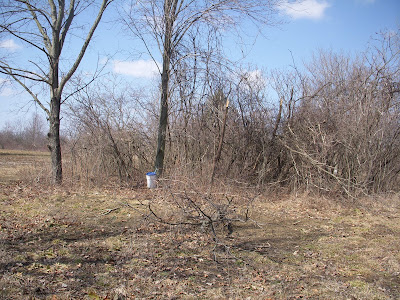 Photo: Two years ago, our 2013 garlic field was covered with scrub/overgrowth, all of it 10-30 feet high, most of it invasive species. We saved as many good trees as we could. Here is one being tapped for our maple syrup in a sumac copse that had significant ice damage this winter (like a good deal of our farm) and still needs clean up. 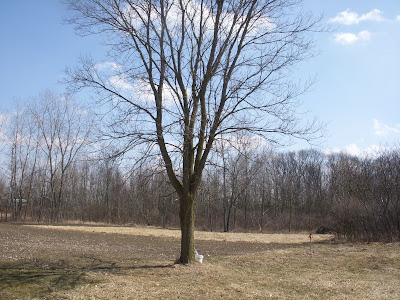 Photo: We have debated and debated about cutting down this box elder tree, which is on the east side of our 2012 garlic field and on the west side of our 2011 garlic field . It is considered a 'junk tree', but this single tree (a member of the maple family) is our largest sap producer. We actually have two taps on this tree and fill that 5 gallon bucket almost daily. The sap is not as concentrated as that produced by a sugar maple tree, but it is still delicious! Besides, for two years we positioned our wooden swing to be in the shade during the heat of the day so we could sit down once in a while for a short rest when harvesting our garlic in July. I think the debate is over and this tree will stay! 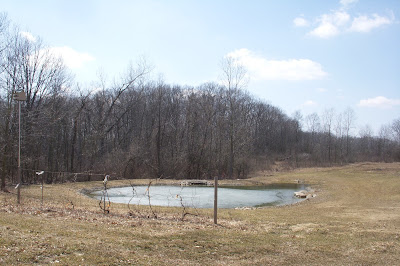 Photo: Our pond, the ice almost gone, looking to the west with our grape arbor in the foreground. It has taken us (mostly my husband) three years of careful pruning to:
#1) find the number of vines that had been planted,
#2) find the base of each individual live vine,
#3) cut out the dead and excessive vineage,
#4) remove all the other vegetation that was in there - awful rose bushes, buckthorn, honeysuckle, autumn olive, and red-twig dogwood, but we saw no poison ivy!,
#5) untangle the vines from and take out the old welded wire fence,
#6) put in the correct support, which is two 8-foot cedar posts supporting a two-wire arbor and one 6-foot t-post at each plant,
#7 tie up and prune the remaining vines, and
#8 now we are waiting for blossoms (there are buds) and grapes!!
A one-line item on the the 'to-do' white board in the kitchen has been a 100-step process and taken three years, but we are very near the finish line - whoo-hoo!! 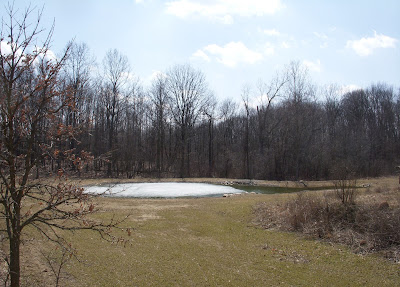 Photo: Our pond with the ice almost gone, photo taken from the back of the garage. The 'bare area' in the center of the photo actually does have lawn grass and clover planted and growing. This is the area that was wet with water flowing back into the house due to poor grading, poor drainage, poor planning, etc etc. There are still sections where cattails growing although they are not clearly visible in this photo. Someday (maybe this summer) we'll start developing this low area behind our house (and where our walk-out basement is) into useable outdoor living space. We have such grand visions and in fact we bought this whole mess because we had those grand visions of what care and love could bring to the sadness that overcame this land and house. :)

Happy spring everyone! It won't be long now before I'll have to put blogging on the back burner as we move into our outside focus. Phoebe can't wait!! She has already had to have one emergency bath at the pet store as she found something to roll-in that was just glorious in her view of the world and just downright awful in ours!

Cultivate your life - you are what you grow - inch by inch, row by row, or trim out vine by vine!

Email ThisBlogThis!Share to TwitterShare to FacebookShare to Pinterest
Labels: Dogs, Life, The Farm