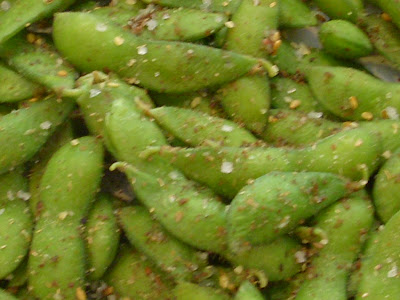 (Photo: Edamame, boiled, drained, chilled and sprinkled with a mixed herb seasoning)
A research study published today examined and compared the soy food intake and breast cancer recurrence and death rates in a large population of Chinese women living in Shanghai who are breast cancer survivors. The data, collected for approximately four years, showed a reduced recurrence and death risk in those women who consumed higher intakes of traditional soy foods.

The reduction in risk "maxed out" at an intake of 11 grams of soy protein per day, which when translated into food, could consist of approximately 1-1/2 cups of soy milk, 1/2 cup of firm tofu, 2/3 cup of edamame as examples (or an appropriate combination of various soy foods - check the nutritional labeling for the soy foods you purchase).

"The inverse association was evident among women with either estrogen receptor-positive or -negative breast cancer and was present in both users and nonusers of tamoxifen. This study suggests that moderate soy food intake is safe and potentially benefitical for women with breast cancer," the researchers write.

An accompanying editorial in the December 9 issue of JAMA does raise cautions about extrapolating these data to breast cancer survivors living in the US who will have many differences from Chinese women who were born and raised in China, but do say it is likely that soy foods such as those traditionally consumed in Asian diet are safe for breast cancer survivors and may provide benefit for reducing risk of recurrence and death from breast cancer.

After my second breast cancer diagnosis nearly 15 years ago, I began consuming traditional soy foods made from soybeans (i.e., tofu and soy milk) on a daily basis for the first time in my life. It's likely that I had eaten a small amount of tofu when eating at a Japanese restaurant, and I know I sampled soy milk when tasting foods at conferences, but I also know I had not purchased tofu, soy milk, or any other soy food other than soy sauce to eat at home.

However, I knew that soy beans contain a large array of molecules that have anti-cancer activity, although the molecule that has received the most attention is genistein, which has been called a "phyto-estrogen". To make a long story short, as both a breast cancer survivor and Registered Dietitian, I have been regularly following the research and talking to scientists for 15 years about the potential pros and cons of consuming this estrogen-like molecule in food, always coming down on the side of consuming it in the foods and amounts typical of an Asian diet (1-3 servings/day).

Has my soy food consumption helped reduce my risk of recurrence (either locally or as distant metastases)? Frankly, it is impossible to truly know if that is the case. However, as my oncologist told me ~ 10 years ago, it is very clear to him that, based on my experience, soy foods are safe, and he encouraged me to "keep doing what I am doing".

Thankfully science keeps marching on with data being accumulated to help cancer survivors make lifestyle choices to increase their odds for living a long and healthy life. This is a case of science catching up with me as I was making personal decisions that needed to be made before all the science was in.

Do we know everything we need to know yet? I am sure that is not the case, but right now, I feel quite comfortable continuing to recommend and consume soy foods on a daily basis. I will qualify that statement to state that I only consume organic soy foods, which be definition are not made from soybeans that were genetically modified. In addition, I try to only purchase soy foods made from organic soy beans grown in the US.


I'm going to try growing several varieties of organic soybeans next summer on our farm. I'll let you know how that works out (if I can keep the groundhog(s) away!).


"Cultivate your life - you are what you grow - inch by inch, row by row"

With edamame. do you eat the pods or not? With the seasonings added on the outside, I would think so. Therefore it must be like eating snap peas. I'm not sure I could face the pod although the beans aren't bad, preferably in something.
Gillian

Gillian,
Good question. I do not eat the pods, but "strip out" the inside beans with my fingers. The seasonings look pretty when serving and then add flavor when eating this finger food.
Diana