Bluebirds - A Recipe for Happiness

I've been looking, looking, and looking for an Eastern bluebird on our new farm property since we first went to look at the house and land last March. I have seen one fly across the road about a mile away on Dec 27, land and pose in the sunlight next to the road for a great view, but that had been the only one I've seen. Until today! While driving down our driveway, I saw one fly from the dead ash tree at the front of our land (in the center of the photo at the top of my blog) to the stand of staghorn sumacs just to the south of our garlic fields (on the right side of the photo currently at the top of the blog).

I don't remember where I first learned of the long and widely held association between bluebirds and happiness. However, I still vividly remember the deep happiness I felt the very first time I saw a small flock of bluebirds (February 29, 1976 at Festge County Park, just outside Madison, WI), and I also clearly remember the look of happiness that spread over a friend's face when she opened an office "secret-Santa" gift to find two blue glass "bluebirds of happiness".

One of my favorite artists and writers is Julie Zickefoose. Although many people may recognize her name from her lovely NPR commentaries, I was introduced to Julie's art and writing years and years ago in Bird Watcher's Digest magazine and have been a fan ever since. When I heard that Julie was coming to speak at a local bluebird festival several years ago, I quickly looked through all of my past magazines to find an issue where she had drawn the cover artwork to take with me, hoping for an autograph. She happily autographed 5 covers for me, and 3 of those 5 were of paintings of bluebirds, one of her favorite subjects that she paints using observations of bluebirds on her own farm in southern Ohio.

In the early 80's I was a bluebird trail monitor for several of the trails established in the northern Illinois forest preserves nearest to our home at that time. Two of those summers, I monitored the trails checking on the bluebird houses with my youngest son in a carrier on my back. The first summer was understandable and easy, as he was only 6 months old. The second summer was more challenging as he was now 18 months old and considerably heavier. I really envisioned that he would love to walk those trails with us, and he tried. Of course he got tired, and I did expect to carry him part of the way, but what I didn't envision was his aversion to having any high grass or twigs touch his sturdy little legs. He was so upset (!!) that I still remember the instant I sighed with sadness, put him into the carrier on my back, and thought to myself "this child will never be a naturalist". (Thankfully, thankfully, 27 years later, my worries in that regard have turned out to be totally unfounded!)

However, that summer was my last to volunteer for bluebird trail management in Illinois. The following year I was on chemotherapy and the year after that I was still too debilitated from my treatments to do all the walking required to monitor the trails. Then we moved to Michigan and that enjoyable part of life was put on hold.

Until now! Seeing that bluebird today has brought back such past happiness and also given me much happiness to look forward to. I knew I was remiss at not getting bluebird houses set out last fall, so the bluebirds that stay all winter (and many do in this area) would potentially have a place to take cover during nasty winter weather and also have first choice of a nesting box for the upcoming spring. While I cannot get any poles in the frozen ground at this date, I am going to quickly look for other mounting locations (like one of our clothesline poles?) and also be ready to get some up in the best locations as soon as the ground thaws enough to do so.

According to Wikipedia, the bluebird is a widely accepted symbol of cheerfulness, happiness, prosperity, hearth and home, good health, new births, the renewal of springtime, etc. So I take the January appearance of a bluebird on our property as a positive sign for the renewal that our new home and land is undergoing in 2010.

Although I did not have my camera ready to take my own photo., I leave you with two beautiful images of bluebirds in sumac during winter. The photo is from the web site for the Tennessee State Parks and the painting is from Julie Zickefoose's web site. If we are lucky, we may have the opportunity to move a beautiful old barn like the one in Julie's painting to our property to both preserve and restore (stay tuned - I'll be sure to let you know if the stars align for an opportunity and effort of this magnitude). 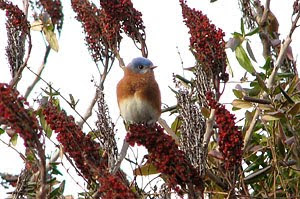 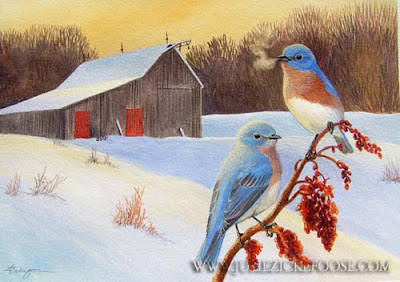 I hope you find your own bluebird of happiness, something that brings back happy memories in addition to something to look forward to with happiness.

I remember signing your magazines and am delighted to find you in the blogosphere. I've been here for four years, posting about bluebirds and all manner of other fauna. Hope you'll stop by to check me out and I wish you all the best!

Moving a barn must be a huge job. Good luck with it and with the bluebirds. I'll be watching for pictures.

Julie,
Thanks for stopping by my blog. :-)
I just added a feed to your blog so I can keep up with you on a regular basis. I hope all my readers check in with you, too!
http://juliezickefoose.blogspot.com/

Julie's artwork is stunning! I didn't know that bluebirds are a symbol of happiness. We have a flock that is overwintering. They love the berries on the juniper bushes. They are such beautiful birds.

I wandered over here from the Oncology listserve and thought I would say hello. I do appreciate your wisdom on the listserve and have perused your recipes and plan to try a few. I will be starting up my minigarden in April and am wondering if you can offer advise on the best type of kale to plant. I live in CT which is a similiar climate to yours...but sandy soil! Best of luck to you on your new farm!