Small steps are necessary to reach a goal. Below my comments I have included an article from the February 19 2008 NCI bulletin.

This article about the effects of circadian rhythm and various dietary supplements on the development (i.e. prevention) of cancer caught my eye. Back in 2003, I chose a small pilot research proposal wishing to investigate this area of study as the recipient of funds from my research endowment at The American Institute of Cancer Research. In fact, as I read through the article, I saw that the same researcher I helped to fund is the topic of this article and now has a much larger grant from NCI to do further study. 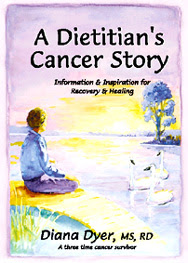 My endowment at AICR is funded by the proceeds from my book sales in addition to generous donations from others who share my vision of increasing research focused on nutritional strategies to promote cancer survivorship. Every time you purchase a book for yourself or to give as a gift, please visualize your gift going even further, like ripples spreading across the lake after tossing a pebble into the water. We just cannot see how far positive acts will spread, or how long they will all take to fully reach fruition.

Thank you, thank you to all who have purchased books in the past and to all of you who will purchase books in the future. You have helped get nutritional research on the radar screen at NCI, and my next dream to get this research from the lab bench into the hands of the public!

Thank you again. You have given me an amazing day!

I thank you God for this most amazing day:
for the leaping greenly spirits of trees
and a blue true dream of sky; and for every
thing which is natural, which is infinite,
which is yes.
~~ e.e. cummings

Probing the Effects of Circadian Rhythms on Cancer
A growing body of evidence from both animal and human studies indicates that circadian rhythms - the biological rhythms that mimic the 24-hour cycle of the turning of the Earth - influence cancer in a variety of ways.

In mice and rats, disruption of circadian rhythms has been shown to increase the rate at which a variety of cancers develop. Epidemiologic studies have found elevated rates of breast cancer in women 15 and prostate cancer in men 16 whose circadian rhythms are disrupted as a result of working rotating day and night shifts.

The efficacy and toxicity of more than 30 anticancer drugs has been shown in animal studies to vary by more than 50 percent depending on the time of day that treatment is delivered. Clinical trials 17, conducted primarily in patients with colon cancer, have found as much as a twofold improvement in antitumor activity and a fivefold improvement in patient tolerability when infusions of chemotherapeutic agents are timed to circadian rhythms.

Until recently, scientists thought circadian rhythms were entirely controlled by a "master clock" in the brain known as the suprachiasmatic nucleus (SCN). Recent research has shown that, in fact, virtually all cells - including tumor cells - possess their own circadian "clocks," a discovery that has opened up new avenues for research.

One intriguing finding is that whereas the SCN is synchronized primarily by the daily light-dark cycle, cellular circadian rhythms are strongly influenced by meal timing. Mice inoculated with osteosarcomas lived longer when fed during the day rather than at night (when they would normally eat, because mice are nocturnal).

Now, with funding from NCI, two research teams whose work has contributed to current understanding of the role of circadian rhythms in cancer are trying to further this line of research by probing the possible links among circadian rhythms, timing of food intake, caloric restriction, nutritional therapy, and cancer prevention.

Nutritional substances
Dr. Jack D. Burton and his colleagues at the Garden State Cancer Center in Belleville, NJ, previously found in a mouse model of breast cancer that the drug celecoxib showed circadian variation in both efficacy and toxicity. At specific times of day, the dose of the drug could be escalated 2.5-fold with no increase in side effects.

Another of Dr. Burton's research interests is the use of nutritional substances to treat and prevent cancer. Because many studies have shown circadian effects for anticancer drugs, he wondered whether nutritional agents might show similar effects.

"Many nutritional substances have been found to have both antitumor and chemopreventive effects in various animal models," he says. "But they hadn't previously been tested in a way that focused on the time of administration."

In pilot studies, the researchers administered selenium and curcumin (an ingredient in the spice turmeric) at various times to mice with implanted, human-derived prostate tumors. They found differences in the degree of inhibition of tumor growth depending on the time of administration and identified potential tumor markers that might explain this effect.

On the basis of this pilot work, Dr. Burton's group obtained NCI funding for a larger study to assess in a rat model of prostate cancer whether the chemopreventive effects of selenium and green tea extract are modulated by circadian-based administration. In this model, the rats develop prostate cancer gradually, mimicking the disease process in humans.
Posted by Diana Dyer at 10:36 AM