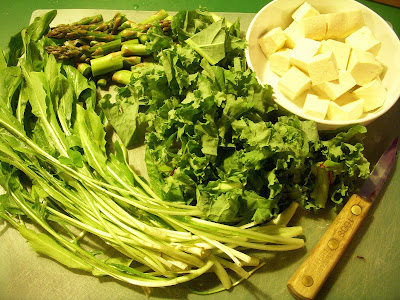 Kateri asked how I fixed it. I cut the mystery vegetable (on the left side of the photo) into short pieces, each about the length of the asparagus pieces at the top of the photo and did a quick stir-fry with some fresh kale, the asparagus, and tofu, which I served over quinoa because that was quicker to prepare than the brown rice I usually use.

Yes, in the immature state this vegetable is used as a green. Yes, it is very commonly grown and served in Italy, particularly around Rome. BTW, I knew none of this, but the wonders of the internet have brought me up to speed.

My husband really tastes his food, and he called this stir-fry combination a 'wake-up' meal! In contrast, last night I used about that same amount of the mystery vegetable, again cut up and then added to a quart of turkey broth and meat bits that I used to finish cooking a full pound of pasta. Other than color, it was not a stand-out part of the dish. (no photo, sorry). I had tasted it raw (white root end and the green tips) again last night and yes, it was still a taste that says "I'm on center stage, not in the wings!" The taste is beyond 'peppery' to what I would call 'bitter'. I added it to the broth for just a short minute before combining the broth with the drained (and not quite done) pasta.

It is not lemon grass, salsify or scorzonera, all great guesses but not correct. However, the guesses are getting closer, closer! :-) In Italy, it is commonly served when mature by meticulously cleaning and carefully cutting each stem in half length-wise, putting them in water for 30 minutes to curl up, grating the bulb over the drained greens, and then finishing with an anchovy-based dressing.

I wonder if I have given you enough hints to pull something else up from your memories or even google a few key words I have mentioned to venture another guess or two.

Back to wedding planning for me, plus house and barn tidying! I'll check in tomorrow to see if anyone else has a flash of insight!

BTW, my bluebird woke me up at 5:54 AM today, singing right outside our bedroom window. I can't think of a happier alarm clock. I was able to take a photo of him at 7:04 but it was too blurry to post. I have to work on not being so excited with the camera. :-)

Email ThisBlogThis!Share to TwitterShare to FacebookShare to Pinterest
Labels: Birds, Food and Nutrition

My guess -- which is more than a guess -- is parsnips. Yes, no? I wouldn't think of their foliage as being peppery because the roots are so sweet, but I've never eaten the foliage. And I don't think of it as Italian, but I wouldn't know about that either, I guess!

One more guess -- maybe more Italian but I'm not sure about that -- kohlrabi.

PS I abandoned parsnips because I think their foliage is feathery, like a carrot's, although I've never grown parsnips so I'm not sure. I know they're in the same family.

Well, I give up. I looked through my favorite Italian seed catalog and didn't find any thing that even remotely looks like that--if it isn't scorzonera. (the leaves do look like the photo of the scorzonera leaves...) Looking forward to you telling us what it actually is.

I cheated but is it Roscano, also called Barbe de Frita.

Whoops, it is barba di frate. and another name is agretti

Such good guesses. Now I want to get an Italian seed catalog, too! I was told this mystery vegetable is puntarelle (Catalogna de Galatina). If you do a search with that term, you can see images that pretty clearly match the photos I have taken, although the version I was sold was still immature, not fully bulbed out at the bottom. I bought it at the Ann Arbor Westside Market from Dragonwood Farm. Now I am inspired to see what other vegetables are at the market that are new to me! How about for all of you? Please comment if you find one. :-)
Diana